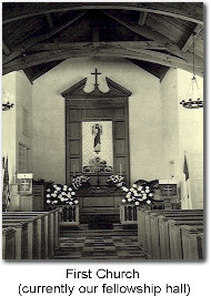 Community School served as the worship site for two years. The young congregation then worshiped at Wright School, two miles west of the present site.

In 1949 Village Lutheran Church purchased the property at 9237 Clayton Road for $22,000 and erected a church of its own. Dedication Sunday was November 20, 1949. While the church was under construction, Pastor Meyer moved to Kansas, and the Rev. Paul Boecler came from Dearborn, Michigan as the new pastor. He served from December 1949 to August 1967.

God continued to bless the young congregation. In 1950, it built a parsonage on the east end of the property. In 1954, to provide additional room for Sunday School, this home was made the Youth House. The congregation bought an older residence (the present parsonage) and property adjoining to the west for $36,500, expanding to four and one-half acres. Two morning services began in June 1953. A still larger facility was needed for the growing congregation. 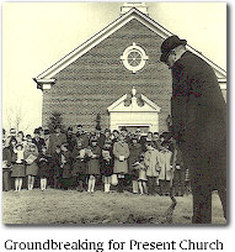 The congregation again engaged the architectural firm of Froese, Maack and Becker. On February 25, 1968, the new sanctuary and expanded facilities were dedicated to the glory of God, at a cost of about $250,000. A choir began.

The Rev. Arden Mead became the new pastor, serving from July 1968 to May 1976. The congregation continued to grow. A two-story structure to the north was added, with dedication in February of 1973. Then came a time of testing for the congregation. The Missouri Synod, of which Village Church is a part, had internal problems during the early and mid 1970's. Village congregation became embroiled in the controversy, with the result that Pastor Mead and about one-fourth of the members left and formed a new congregation.

The Rev. Richard Warneck became the new pastor in May 1977. He served through June 1981. During his pastorate, the Preschool began in September 1979. Village Preschool continues at present, with Diane Caughlan as the director.

When Pastor Warneck accepted a call elsewhere, the Rev. W. F. Hischke came from Hamel, Illinois as the new pastor in December 1982. The older residence to the west was renovated to serve as the parsonage for his family. Rev. Dr. Hischke retired in December 1997.

Following the retirement of Pastor Hischke in 1997, Village was faithfully served by Pastor Paul Devantier as vacancy pastor during 1999. Pastor Devantier brought a wealth of experience from years of service and leadership with KFUO radio and with the Lutheran Church-Missouri Synod. The history of Christ's blessings upon Village continued even during the vacancy as a result.
​
Rev. John Temple was installed in January 1999 and served until 2008, when he retired for health reasons.

In July 2009, Village Lutheran Church called and welcomed its next pastor, the Rev. Dr. Kevin Golden. He faithfully served the congregation until July 2021, when he accepted a call to Concordia Seminary, St. Louis.

In May of 2022, Village called and welcomed its current pastor, the Rev. Dr. Tylor Arnold.